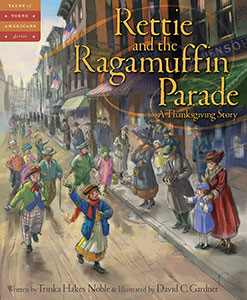 “Vivid art work and a descriptive narrative re-create a vibrant 1918 New York City populated by immigrants struggling to survive an influenza pandemic at the tail end of World War I.  VERDICT An excellent historical fiction picture book for older readers interested in U.S. history or Thanksgiving celebrations, this is a timely selection as this year marks the U.S.’s centennial commemoration of World War I.” – School Library Journal, September 2017